Early, and I mean early, this morning I put Jeff & Josh Brown back on the plane to San Diego, California.  While they were here I had a chance to show them that Kansas City does have wireless internet in their hotel rooms, running water to houses and buildings made out of other materials than sod. 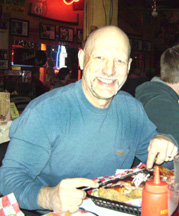 On the business front Saturday saw two very successful investment workshops conducted by Jeff.  Feedback from those that attended has been positive.  There is a hunger in the market to know all they can regarding their real estate investing present and future.

And also on Friday I think Jeff was impressed with some of what Kansas City real estate investment housing has to offer.

From a barbeque standpoint Jeff & Josh got to experience Arthur Bryant’s, BB’s Lawnside and Oklahoma Joe’s Bar-B-Q’s.  You’ll have to ask Jeff which he preferred.  I’ve emailed him a photo of him standing in front of a real BBQ pit at BB’s.  Now he understands how BBQ is made.  🙂

The photos are from BB’s.  (Athol, I was using a small point & shoot in low light.  So forgive the lack of quality.)  🙂

7 responses to “A Successful Few Days In Kansas City”

This site uses Akismet to reduce spam. Learn how your comment data is processed.